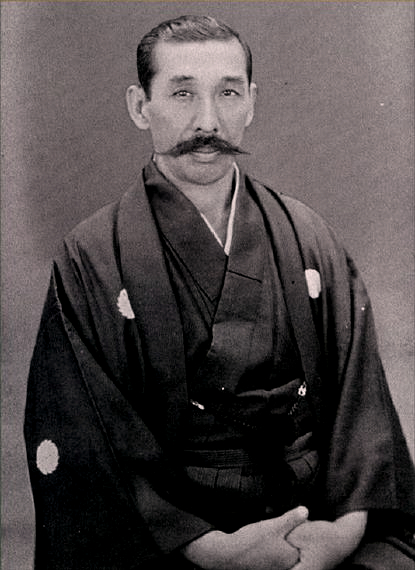 The traditional school practiced at Eishin Dojo is MUSO SHINDEN from Hakudo Nakayama.

IAIDO origins go back to the Nara times (8th century after JC) or at the beginning of Heian era, but a few informations remain.

The modern IAI foundator is HAYASHISAKI JINSUKE SHIGENOBU, born near SAGAMI (nowadays called KANAGAWA) in 1549. HAYASHISAKI JINSUKE SHIGENOBU life and its technical teachings remain obscure, but a lot of schools were born from its legacy.
After its death, HAYASHISAKI RYU school perpetuated. HASEGAWA CHIKARA NO SUKE EISHIN, 7th SOKE, very famous for its saber mastering, created evolution of a lot of technics, and above all, inversed the saber position in the obi, orienting the saber sharpened side to the up in order to throw and cut in only one movement. He created MUSO JIKIDEN EISHIN.

A la mort du 11ème
At the death of the 11th SOKE OGURO YOSHIEMON KIYOKATSU, two separated branches were created in the HAYASHISAKI line: TANIMURA HA and SHIMONURA HA.

The 16th SHIMONURA HA SOKE, HAKUDO NAKAYAMA studied MUSO JIKIDEN EISHIN under HOSOKAWA direction, 15th SOKE of SHIMONURA HA RYU, and under MORIMOTO direction, 15th SOKE of TANIMURA HA. After mastering its art, he created its own style in 1933, which he called MUSO SHINDEN RYU BATTO JUTSU (the art of throwing and cut in one movement, born from a divine revelation from a dream).

Since 1956, HAKUDO NAKAYAMA style is broadcasted worldwide. At his death in 1959 (at the age of 89), its pupils choose the name of MUSO SHINDEN RYU to perpetuate the school.

At the beginning, the iaidoka will learn the “Seitei Iai” serie from the Zen Nippon Kendo Renmei federation (Japanese federation reknowed by the French Judo federation, the FFJDA).

The Seitei Iai serie is made from 12 Katas.

MUSO SHINDEN school teaching is left to the teachers appreciation.

Find out more or adjust your settings.

This website uses cookies so that we can provide you with the best user experience possible. Cookie information is stored in your browser and performs functions such as recognising you when you return to our website and helping our team to understand which sections of the website you find most interesting and useful.

Strictly Necessary Cookie should be enabled at all times so that we can save your preferences for cookie settings.

If you disable this cookie, we will not be able to save your preferences. This means that every time you visit this website you will need to enable or disable cookies again.

This website uses Google Analytics to collect anonymous information such as the number of visitors to the site, and the most popular pages.

Please enable Strictly Necessary Cookies first so that we can save your preferences!